Problem: Can I make a parade float that can hold 100g and travel 50cm?

Hypothesis: I think it is going to be a challenge and I might fail but I will just keep trying.

First I drew a sketch of what my parade float was going to look like. After that I took the materials .Then I started to make it. I made an X with the bamboo skewers. After  that I put two

Then I hot glued it to the cardboard piece that I cut out. 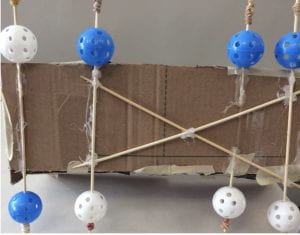 I started making the walls by cutting cardboard into squares and taping it to the base. Then I tested my float down the ramp but it didn’t work. My friends told me that it was because the wheels were only on the front and there no wheels at the back. I took their advice and added one more wheel on the bamboo skewer. I tried it again and it worked better but it still didn’t go 50cm. I cut the bamboo skewers so cut two tiny pieces of bamboo skewers and attached two more wheels near the front of the parade float. I thought since the weight was shared equally it would work better. My float worked and passed the test of going 50cm and traveling 55cm. But then Mrs. Bennett said that you need to add some decoration so I cut out Megan Davids that I drew on paper and glued them to the sides of the float. I also put cotton inside the float. It also held 100g.